If You Can’t Take the Heat… Turn off the Oven

We’re not sure what the weather’s doing over in your neck of the woods, but here in Ontario we just came out of a 2-week long heat wave.  We’re talking 107F.  And this is not a dry heat, this is a hair-frizzing pore-clogging kind of heat that basically renders sweating useless.  (Not that our bodies got that memo- every time we came in from a run we looked like we had just gone swimming fully clothed- how’s that for a pretty picture for ya?)

Anyways, we think it goes without saying that in that kind of heat turning on the oven is completely out of the question.  Even barbecuing seemed like a bad idea, so we were really at a loss as to what to make for dinner for our family.

We’d also like to take this moment to blame the heat wave for our decided lack of posts lately.  We’ve hardly been doing any cooking so we really haven’t had much to share with you guys.  Because you can only post so many salad recipes.

Anyways, we’ll stop making excuses for ourselves and continue on to the good part!

As we said in Tuesday’s post , we had a delicious recipe that uses our pesto coming your way, so here it is… 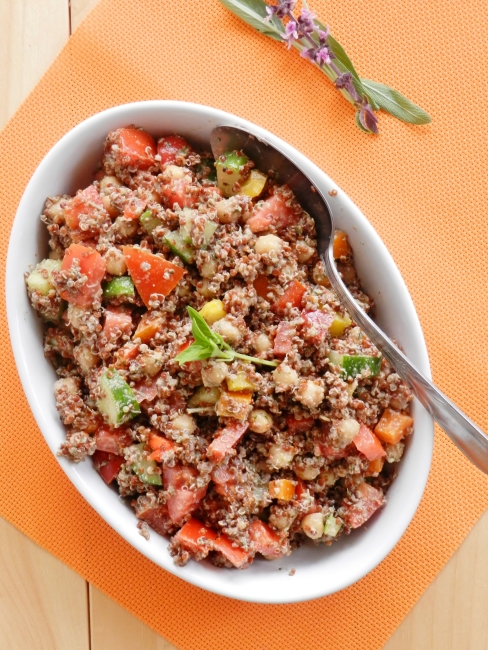 Ok, so right after saying that we didn’t want to start throwing a whole bunch of salad recipes at you what’s the first thing we do?  Give you a salad recipe.  But this is a quinoa salad, so it’s a little different and doesn’t really count. 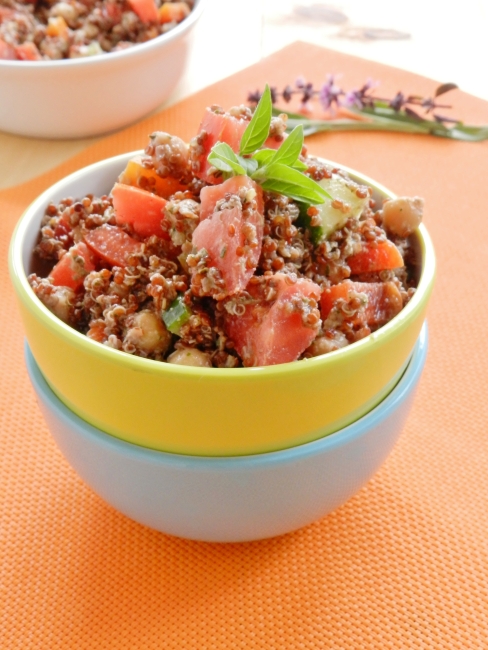 We discovered quinoa for the first time a few years ago and basically become obsessed with it.  We started putting it in almost everything we made so it found its way onto the dinner table several times a week.  It became a running joke in our family that if you didn’t know what was in something, it was most likely quinoa.  It got to the point where every time we made anything everyone would ask if there was quinoa in it.

We suppose it was a tad excessive… 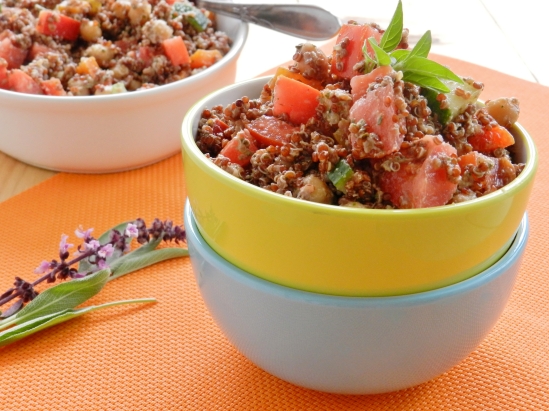 So while the quinoa-craze of 3 summers ago has passed, we still do like to break it out every once in a while.  And it was the perfect thing in this heat wave because it’s a great source of protein that can be cooked in 10 minutes on the stove-top.  Minimal prep and minimal heat required.  Which means more time in the pool- the only suitable place to be during weather like that! 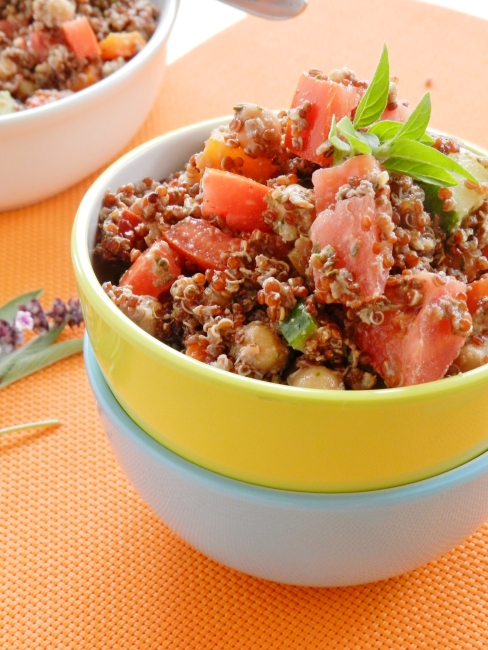 We had a wicked storm last night that took some of the heat away, so we will most likely be turning on the barbecue again, but you can be sure that if another heat wave like that hits we will be making this salad again!  In fact, even if it doesn’t get so hot, we will probably make this tasty dish again anyways 🙂 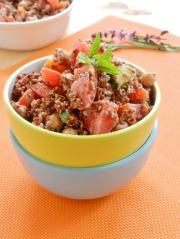 Place the quinoa and water in a medium-sized pot and bring to a boil, uncovered.  Once the water has started to boil, place the lid on top and turn the heat to low.  Allow the quinoa to simmer for 10 minutes.  Turn of the heat and allow to sit on the burner for another 6 minutes.  Remove from the burner, take off the lid and fluff with a fork. Set aside to cool.

Combine the veggies and chickpeas in a large bowl.  Add the quinoa and stir to make sure the vegetables are evenly distributed.  Add the pesto and stir well.  Place in the fridge and allow to sit for at least 30 minutes, so the quinoa has a chance to cool and the flavours have the chance to mingle.

Optional: add some chopped walnuts, dried cranberries, or feta cheese to the salad.

What kinds of things do you make when you’re in the middle of a heat wave?

We are twin sisters who are on a mission to create delicious, healthy food to help others live healthier, happier lives!
View all posts by twosaucysisters »
← Pesto to the Rescue
Simple Sunday: Another Summer Salad →